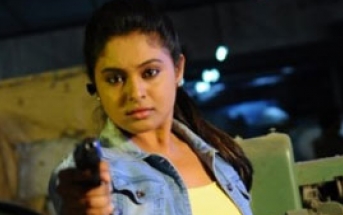 Arunthathi who marked a place for herself in Naigal Jagirathai is all set to prove her mettle in the action sequences in Arthanaari produced by A S Muthamizh for Kiruthikaa film creation and directed by Sundarra Elangovan who had earlier associated Director Bala.

Arthanaari is an action based script, the story is based on the true life incident which inspired me a lot. I don the role of an undercover cop which is quite challenging to me. I underwent a complete make over for this project with lot of home work being done for my character. I was sent for a training under a cop for two weeks , I learnt how to hold a gun and trigger it too. I attended stunt classes and learnt different jump and kicks which was complicate too but that was a thrilling one to do. My Director was so particular that he wanted me to learn all that was required for my role be it stunt or dance.

My director suggested few movies to watch as a reference for my character "The Blue Steel, The Bone Collector, and Mardhani. Trust me i accumulated lot of energy after watching these films. Now after watching 'Arthanaari' i could feel the same energy in me,such is the intensity of the script.I should thank my stars that i am lucky to get heroine oriented script in the beginning of my career. Before we could start the shot of Arthanaari i had couple of workshops for my character. Arthanaari  is not the usual cop role, here the toughness is much more intensified than the other films.. I got injured during a stunt sequence in my ankle , it was intense pain no doubt but the pain vanished when accolades poured from the unit for the dare devil act.Right from my child hood i had been a great fan of Vijaya Shanthi madam, and i am sure 'Arthanaari' will give her plenty of pride as my idol' concluded Arunthathi.