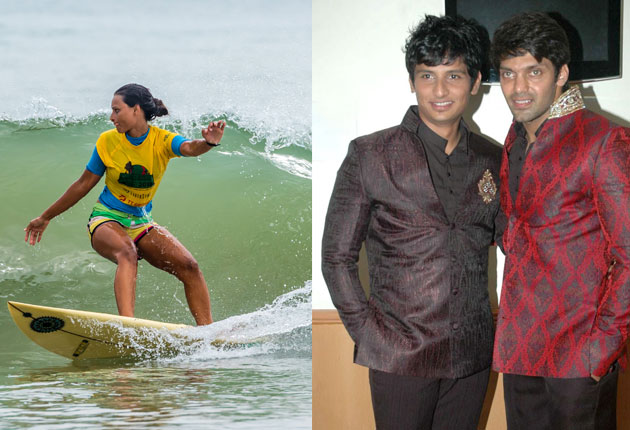 India’s “First Surfing Village” and hub of surf culture in Southern India gears up to welcome the fifth edition of Covelong Point Surf, Music & Yoga Festival 2017. One of most coveted and India’s top surfing competition- Covelong Point Surf, Music & Yoga Festival 2017 will be held at Covelong Point, Chennai from August 25th to 27th 2017. The championship is recognised by Surfing Federation of India. The three-day surfing extravaganza ispresented by the Chennai based TT Group and produced by the award winning production house- EarthSync. Celebrity guests for this year at the premier surfing festival include cricketers Jonty Rhodes & Murali Vijay along with Kollywood stars Arya, Jeeva, and Veerabahu name just a few.

The premier surfing competition will see top men’s and women’s surfers from across the country vie for the top spots under seven categories in Surfing apart from a men’s and women’s category for Stand Up Paddling. SURFING CATEGORIES - Novice (U12); Groms (U16); Juniors (17-22 Years); Seniors (23-30 Years); Masters (31 Years and above); Women (all ages); Open Category (Foreighn Nationals). The registration for the fifth edition of the Covelong Point Surf, Music & Yoga Festival 2017 is currently open. Surfers from across the country and even internationally can log onto http://www.covelongpoint.com/2017/surf/sign-up and register themselves as competitors for the event.

“We have come a long way since 2013, surfing has grown exponentially all these years putting Covelong Village right on the map as a premier surfing destination, and has also produced some of the best surfers in the country from time to time. The sport is growing massively across the coastal belts of the country leaving for more and more surfers to participate in the competition. Looking at the quality of surfers that we have produced over the years, I am sure it’s not long before we will have a roster of surfers knocking on the top glories on the international scene. I am very confident of an extremely competitive field this year as well at the Covelong Point Surf, Music & Yoga Festival 2017,”said Ram Mohan Paranjape, Vice- President, Surfing Federation of India.

The surfing festival is set to play host to some of the top surfers from Karnataka, Goa, Tamil Nadu, Orissa & Kerala alongside some of the top surfers from Sri lanka, Australia, France & USA. Local boys Sekar Pitchai, Ajeesh Ali will be the flag bearers for Tamil Nadu in the seniors and groms U16 category. Sekar has been a 12-time national Stand- Up Paddling Champion. Kovalam’s Ramesh Roy would look forward to continue with his winning ways in the Juniors category post his win at the recently concluded Indian Open of Surfing 2017 at Mangalore, Karnataka. The women’s category is expected to witness a tight contest between Auroville’s Suhasini Damian and Mangalorean Sinchana Gowda.

“India has a great potential for being a successful nation in surfing”, says Arun Vasu, Managing Director, TT Group - who himself has been into water-sports since the age of 13. “This year’s Covelong Point Surfing competition is bigger and we expect it to be even more competitive compared to the previous four editions.  TT Group is proud to be associate with the sport which is growing strong and rapidly. We look forward for an amazing Surfing competition at Covelong this year”, added Mr. Vasu about the event.

The Fifth edition of ‘Covelong Point Surf, Music & Yoga Festival 2017’; besides a national and international level surf competition also features a global music lineup spread across three stages, yoga and meditation classes and alternative healing workshops. The festival’s music lineup this year showcases alternative acts that transcend the boundaries of country and genre. “These three elements – surf yoga and music - act as single experience and work in harmony with each other - that's the concept of the festival” says Festival Director – Yotam Agam - EarthSync, “We wanted to create a festival experience that is holistic, that touches the mind, body and spirit in several different ways - whether artistically, physically, musically or spiritually - a 'choose your own adventure' style concept. Surf, music, and yoga are passions of ours that we wanted to share - giving people the opportunity to learn more about and actually experience any one of these, all in one space”.

The Yoga Shala also brings together a finely curated lineup of renowned yoga and meditation teachers, sound therapists, alternative healers, masseuse specialists, martial artists and musicians for a series of sessions designed to set participants on the path to holistic wellness, as well as music performances of a spiritual leaning.

The annual event attracts thousands of attendees every year from across India and around the globe, with last year’s footfall being approximately 15000 people. A pilgrimage site of sorts for surfers, yogis, and artists alike, the event also features a vibrant flea market, food stalls, art installations and beach side activities/sports. The Chief Guest will be Dr. C SylendraBabu - the Additional Director General of Police (ADGP) of the Prisons.