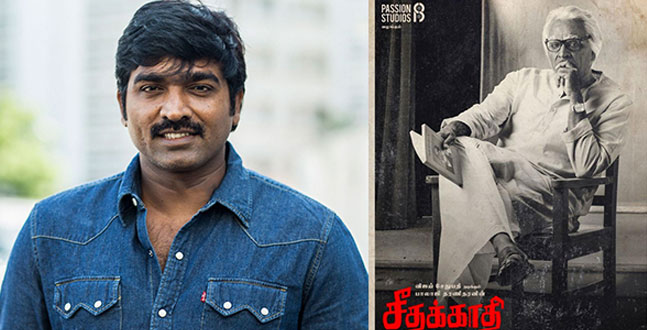 Usually when a piece of art work is analyzed or acclaimed, it would definitely never short off the world ‘Soulful’. It’s soulfulness that brings joy, emotions and sometimes the reflection of maladies through the essence of art. Such a bundle of emotional soulfulness is always an intriguing ingredient in a drama artist’s life. Significantly, Vijay Sethupathi steps into such a character that he believes would be a lifetime milestone.

With Vijay Sethupathi celebrating first glimpse of Seethakaathi ‘The Making of Ayya’ in awestricken mode, the actor sends his words of personal reflection. “Seethakaathi is a film that is tailor made for legends like Sivaji Ganesan sir or Kamal Haasan sir. Initially, Balaji Tharaneetharan had some of the big names in the industry to play the protagonist, but couldn’t reach them. Without any options left in hand, he opted for me to be a part of it. I believe and assure that I would do complete justice to this film.”

As our excitements take a long tunnel run to know what his role is and look is all about, Vijay Sethupathi enlivens it with a little ray of light saying, “I play an 80-yr old drama artist. Seethakaathi is a soulful film that will impart a message that ART HAS NO END! IT’S IMMORTAL. It will live through someone or the other. I am really blessed to get this wonderful project as my 25th film.”

To see the same combination of Vijay Sethupathi and Balaji Tharaneetharan who offered a fantabulous comedy cult  ‘Naduvula Konjam Pakkatha Kaanom’ delivering us film of unheralded panorama, it’s an irresistible enchantment. Produced by Passion Studios, the film has musical score by Govind Menon and cinematography handled by SaraskanthT.K.