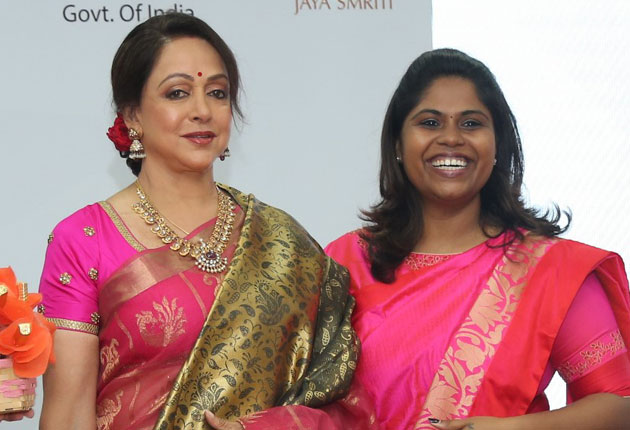 Evergreen and the only Superstar amongst actresses for the longest time, Hema Malini is considered the unofficial ‘cultural’ ambassador for India as she made it her mission to propagate India’s diverse culture to the world.

Hema Malini formed JAYA SMRITI in 2006, an initiative which serves as a platform for aspiring young artistes in the field of Dance and Music from all across India, an event staged every year as a tribute by her in memory of her mother, Mrs. Jaya Chakravarti. With a vision of broadening the horizons of JAYA SMRITI and to promote friendship between India and other countries based on art and culture, Hema Malini envisaged ‘SYNERGY’ – An International Cultural Festival, a global platform for different cultures to come together in the spirit of solidarity.

In association with Ishte (Event Partner for Chennai) and Jeppiaar Engineering College (Title Sponsor), Hema Malini’s ‘SYNERGY’ 2017 will be a cultural Odyssey that will expose the world to two ancient cultures, India & Georgia, giving a platform to showcase their talent, a unique confluence of Georgian Dance Ballet ‘Sukhishvili’ and various Indian dance forms. The festival, under the auspices of JAYASMRITI, will highlight the repertoire, cultural richness & fearlessness of Georgian dancers at a different magnitude, and level with the grace and timelessness of Bharatnatyam, Kathak and Pung Cholom. She believes that dance and music really enhances the inner self and outer self in a positive way. India has such beautiful traditions, she would like the youth to participate in nation building and extend support to PM Narendra Modi’s vision of making India a cultural super power through yoga & performing arts.

Supported by Ministry of Culture, Government of India, this year the ‘SYNERGY’ festival of Indo-Georgian Dance Fusion will travel to 4 major cities of Mumbai, Delhi, Kolkata and Chennai and will be graced by dignitaries, celebrities and various art connoisseurs from across the country.

The grand event will be held in Chennai on 17th September 2017 at Lady Andal School, Chetpet.

Hema Malini happily enlightens “Our dances are of two types, classical and folk based on Natyasastra (Science of dance) and Abhinaya Darpana (a mirror of gestures) which are derived from the rich treasure trove of mythology, classical literature and legends. This year we are proud to associate with another rich ancient culture of GEORGIA, to create a fusion, a SYNERGY. We intend to grow every year under JAYASMRITI, and have such wonderful collaborations with different countries. India is so culturally rich, a golden bowl of culture and heritage and I want to safe guard our culture, and spread it across the world”

Nino Sukhishvilli, one of the founders of the Georgian National Ballet ‘Sukhishvili’ says, “It was our pleasure to perform again in India. It was 55 years ago in 1962 we came to India to perform and then the Prime Minister Pt. Jawaharlal Nehru saw us performing on stage! Later he came to meet and greet us and congratulate us for the performance. My big respect to Hema Malini who visited Georgia, after watching our rehearsal she decided to invite us to India again. I think culture exchange is very important to our country and we will be very happy to present our culture to Indian audience,”

Reema Thakkar Tiwari, founder, Ishte says, “We are delighted to host SYNERGY in our namma Chennai where art and culture is the life of us. We also thank Hema Malini for planning this event for amazing dancers from our country as well as Georgia and giving them this platform to showcase their talent”

Starting 2017, SYNERGY will continue to collaborate and create events that will become milestones towards friendship, mutual understanding and respect between the participating countries.