Rio Raj-Ramya Nambeesan starrer ‘Plan Panni Pannanum’ audio launch happening this morning at Sathyam Cinemas. Sivakarthikeyan was present for the occasion to launch the audio. Badri Venkatesh has directed this film, which is produced by Rajesh Kumar and L Sinthan for Positive Print Studios.

Director Badri Venkatesh said, “The shooting of this film has been completed in a short span of time. If not for the support of our producers and the entire team, this would have not been possible. There were 18 artistes in the movie and all of them were  completely dedicated towards getting our planned schedules completed on time. Yuvan Shankar Raja has been my inspiration and I thank him for giving wonderful songs in the movie. I thank Sivakarthikeyan sir for two reasons – One for being here and another one for launching Rio Raj through ‘Nenjamundu Nermaiyundu Odu Raja’. It was only through this movie, I could realize that Rio is capable of performing such emotional scenes.”

Actor Sivakarthikeyan said, “I am a great fan of director Badri sir’s Baana Kaathadi. Usually, a Gold medalist in the filmmaking technology like him would always prefer unconventional themes, but he is an exception, where he has been making entertaining movies. This evidently shows that he aspires to make movies based on different genres. I am so happy to be a part of this occasion as most of us present here are from the small screen industry including DD. I am thankful to the press and media friends, who have always made content driven movies a good success like Kannum Kannum Kollaiyadithaal and expecting your support for this movie as well. Recently, I saw the short film of Ramya Nambeesan and was awestruck with her tremendous appeal. Wishing her to become a filmmaker soon…”

Actor Rio Raj said, “I thank Badri sir for giving me an opportunity to be a part of this film. When Ramya Nambeesan got onboard for this film, I was really clueless on how well she would gel with us for we used to prank and pull each other’s legs. However, she completely enjoyed the time with us and has delivered a good performance. I thank Sivakarthikeyan anna for launching me and making a good space for me in the industry now.”

Actress Ramya Nambeesan rendered few lines from the song she has crooned in the movie. Later she spoke, “I thank the whole team for their support. Just like the film’s title, director Badri has planned the project very well and has executed it perfectly.” 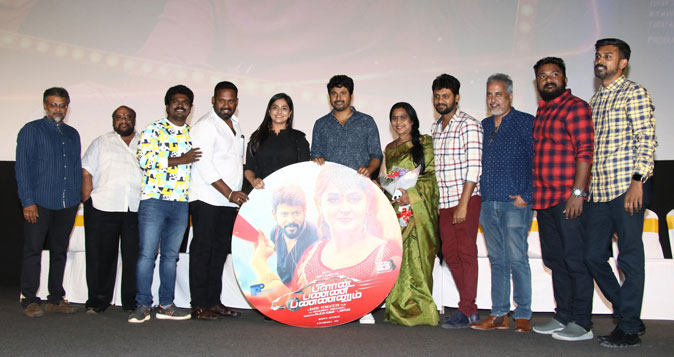 Actor Robo Shankar said , “Director Badri is a huge talent or else to complete a film with so many actors in just 28 days would have been impossible. Rio Raj is now blessed with a baby girl and it’s a sign of fortune for him just like how Sivakarthikeyan is also gifted with a daughter. I wish him more success in personal and professional life.”

Actor Bala Saravanan said, “I thank Rio and Badri sir for giving me an opportunity to be a part of this film. Rio and I have been friends from the days of our Kanaa Kaanum Kaalangal in Vijay TV. Although, we both belonged to different seasons, we have been sharing a good bond as though, we were on the same sets.”

Actress Viji Chandrashekar said, “The film will be a jolly ride and enjoyed by all. It’s full of fun, where audiences can sit back and enjoy the show and walk out with smile on their faces.”

Actor Santhana Bharathi said, “I play the father’s role of Ramya Nambeesan. Plan Panni Pannanum will be a fun filled and entertaining movie, where everyone can enjoy thoroughly.”

Producers Rajesh Kumar and L Sinthan welcome the cast and crew along with chief guests with bouquets. Later speaking on the occasion, Rajesh Kumar affirmed that everyone has done a fabulous job in the film and it will be surely enjoyed by everyone.