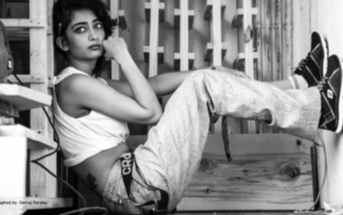 Scripts with action extravaganza, with a religion like following mass hero won't always necessarily have strong female characters in it. And for a female actor hailing from an illustrious cinema family to be launced in such a project adds immense value to the actor and the project mutually. One such pride launch is Akshara Haaan in VIVEGAM. Produced by Sathya jyothi films, Directed by Siva, starring Ajith, Vivek oberoi and Kajal agarwal, this movie has 'Ulaganayagan' Kamal haasan's second daughter Akshara Haasan playing a very important role in VIVEGAM.

Talking about Vivegam, she says," I was thoroughly impressed with my character when director Siva sir narrated it to me. It had so much importance and it playes such a vital role in taking the story forward. It has mutiple layers and I just loved doing this role and this movie. Siva sir was so encouraging and the whole unit was filled with positivity throughout. Ajith sir was a delight to work with. He is so unassuming and helpful to everyone. Since our common interest was photography we spoke and discussed a lot about it during the break times. I must say Vivegam is the most positive set I have been on so far. The weather conditions were extreme in Bulgaria and Serbia. The whole team had to work extra hard to shoot in such locales and the fantastic results will be there for everyone to see soon. I am extremely excited and thrilled about the movie's release " says Akshara Haasan